Posted by Subaru of Niagara

Subaru Canada closed its first quarter of 2015 with its highest sales results ever for a first-quarter period, with 9,256 units sold during the first 3 months of 2015! This is an increase of 13.1% from the same period in 2014.  Also impressive was the fact that Subaru sold 4,036 of those vehicles in the month of March! This breaks their previous March by 16.1%. March also marked the 15th straight month of sales growth for Subaru, one of its longest streaks ever.

Subaru’s mid-sized sedan, the Subaru Legacy continues to lead in sales growth, with 365 units this march, which was an increase of 8.34% from the same period of last year. The Legacy was named Canadian Car of the Year by AJAC earlier this year, and is also an IIHS Top Safety Pick.

Not to be outdone, the 2015 Subaru Outback also had its best March ever with 946 units! An incredible 49.9% increase from last March! This isn’t really a surprise to us, as we’ve seen dozens and dozens of happy Outback customers this year.

Come into Subaru of Niagara and see why more and more people are choosing us every day!

END_OF_DOCUMENT_TOKEN_TO_BE_REPLACED

Thanks for a Great January!

We don't know if it's the snow or just your all-around love for Subaru, but January was a record breaking month for Subaru Canada and we want to say THANK YOU! It looks like it's going to be another amazing year!

Our best month yet

Subaru of Niagara had the best month yet and it's all because of you! Niagara has realized just how great driving a Subaru is, especially in the winter. Between Subaru's symmetrical all-wheel drive, boxer engine and superior safety ratings, we are the best winter ride!

But it wasn't just in Niagara - all regions across Canada set new records! Wow!

The award-winning Forester put the "sport" back into SUV and had its best January on record. Our rear-wheel-drive sports coupe BRZ also celebrated its best January ever! Of course, the Impreza, Legacy and WRX were popular choices this winter too.

Thanks to our great sales team!

Of course, we'd be remiss not to mention our awesome sales team. It was a close race in January, but in the end Jay and Otto came out tied as our Sales People of the Month. Thanks for all the hard work last month! Keep it up!

END_OF_DOCUMENT_TOKEN_TO_BE_REPLACED 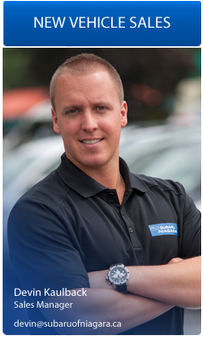